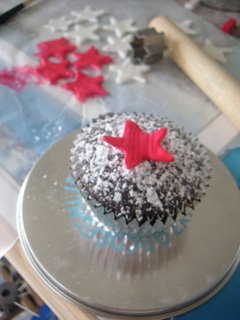 I wanted to bake something vegan for poker night and came across this interesting cake recipe from Fior. Vegan cakes are the hardest, I have failed a couple times before but I am a sucker for mint and chocolate so I had to give this one a chance:) Such a smart decision! It is by far the most compliemented cake I've ever made. It also marked a new height for future baking projects with a tough comparison point...Stressed! Nope, just desserts spelled backwards:)

I followed the exact recipe but used 1 teaspoon of mint extract instead of fresh mint. I was worried if that would be plenty or not enough but it was the right amount.

The only sucky part was, I didn't taste any, because I am on this South Beach diet. I hate diets, I hate dieting and I don't like stupid rules like no fruit or cereal or carrots for two weeks... I am craving chocolate:(

So, I will have to make it again very soon. Actually, Jason and Lane suggested to substitute apple sauce for some of the sugar. Such a good reason to bake a cake! I am very tempted to try it tonight...I will be happy to share some, as this recipe makes 12 cupcakes and a large Bundt cake. Any takers? 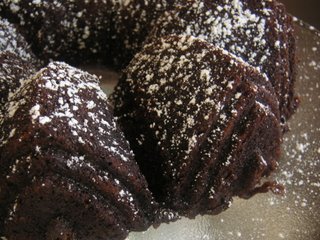 P.S. It turns out poker is not my game, but I would pay $5 anytime to hear Goldman's confused statements about Jews and Turks, quite entertaining:)
Posted by Baking Fairy at Friday, March 24, 2006

I love chocolate with mint...It's a great combo in my book.. Lovely cupcakes too!

Where is the recipe for this lovely looking baking? It's not showing up in my browser.

Hi Jeanie, looks like they took the original site down. I will post the recipe again in a few days as this is my all time favorite vegan chocolate cake recipe! Much love.