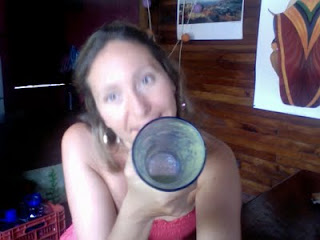 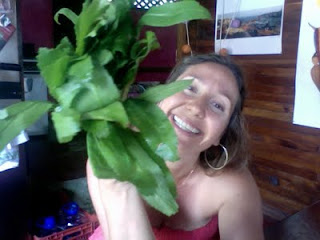 It is super fun when i invent something delicious and start feeling like She-RA, the twin sister of He-Man and laugh at myself:)...This smoothie is deliciously green and I swear it is full of super natural powers. Yes, of course I watched too many episodes of She-RA growing up:)

Here is the recipe for one:)

1 tablespoon of hemp butter (if you don't have hemp butter, use tahini)
1/2 cup pineapple
1 celery stick
1 frozen banana
1 tablespoon of green powder (I used KYO Green, you can make your own super power with spirulina, wheatgrass, ect)
3 leafs of wild cilantro, or 1/2 bunch of cilantro
1/2 cup water

that's all...blend it well and feel the power...Sorry, I forgot to take a picture of the smoothie and drank it at once:( Bad blogger:)) Got a picture of the empty glass:) Wanna see the after effects? Watch the video...

I want to tell more about cilantro, not only because it tastes amazing but it is also the secret agent in the herb universe. Fresh cilantro, sticks to the chemicals in your body and takes them out, for example mercury. Cilantro also controls blood sugar, lowers cholesterol and fight inflammation (wanna clear up recurring infections, both viral and bacterial, eat some with omega-3 rich foods, like hemp, flax, borrage oil.) Woooo hooo! Fight the bad stuff in your body, with She-RA power! Wild cilantro, is something i discovered in Costa Rica. It is a thin long flat leaf, ok i just took a picture, much easier:) I never saw it in San Francisco, but maybe in the Mexican markets, they must have it. If not, good old skinny cilantro is still amazing.

decadency in the jungle

ahhh, life in costa rica...in montezuma in the rainy season....everyday the present opens up with beautiful flowers, crashing waves, lots of sand, a little rain drop, soft breeze, fireflies....discoveries of routine daily life is so precious, i love my life now. Sure it changes daily; I can't promise emotional stability now, but I am working on it:) Organico is closed, I am as lazy as any cricket and yes, the ants are working hard on finishing my red quinoa smuggled from San Francisco...But, I am happy to be lazy, it seems like not enough time just to be. Note to my 90 year old self, you were happy and lazy at 33 so suck it up and dance like crazy and don't worry about rice and beans:))

Anyway, long introduction, laziness comes with its benefits of discovering decadencies, self comfort, more digging into how can I enhance this experience of pleasure, i feel like royalty in my sand castle! So, of course coffee for a vegan girl was decadent with soy milk at home and black anywhere else...until...I discovered something new at a friend's castle. Coconut Milk! I had it with regular coffee and immediately tried it with cappuccino...aaaaahhh, what was i thinking, creamy, delicious, mostly, decadent!!! It is a very rich experience...So enjoy a cup of coffee for me, with coconut milk, and smile to your inner goddess and start dancing before 90!!!

oh, here is a video too...sorry it is on you tube and no access from Turkey....

Posted by Baking Fairy at Wednesday, October 14, 2009 No comments: 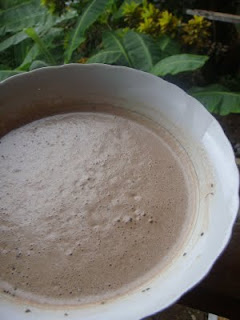 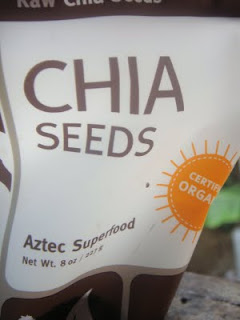 I am not a fan of puddings. I dont like spending time at the stove and constantly mixing under heat, especially in the tropics. Until I discovered chia seeds! Here is a great super speedy recipe that does not need any stove time plus all the benefits of chia seeds...high in omega-3 fatty acids (in fact, the highest-known vegetable source of omega-3s!) and a 1-oz. serving contains about 4grs of protein. Check out more benefits of this amazing seed here...

Ok, one last thing, if you hate tapioca pudding, pass this recipe with confidence:)))

1 1/2 cup milk (soy or other non-dairy milk, coconut or almond milk would be great too)
1/4 cup agave
a few dashes cinnamon
1 tablespoon of acai powder or 1 tablespoon cacao powder

a pinch of salt

Place the chia seeds in a bowl or covered container. Mix all the ingredients with a fork and let it soak on the counter for at least 10 minutes until thickened, or cover and soak in the fridge overnight.  Stir again before serving, and top with fresh fruit and another dash of cinnamon or spices.