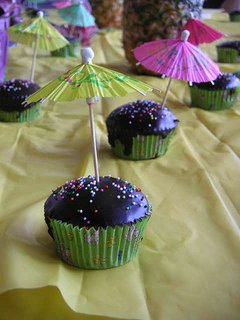 Last week we had a Hawaiian themed birthday party at work and I baked these cupcakes. I have to admit it is getting harder to bake on week nights and thanks to Battlestar Gallactica, my nights are filled with Sci-Fi action.

So, it was one of those Battlestar nights...I had a batch of these in the oven and the milk for the glaze was on the stove. I poured chocolate chips into the boiled milk and turned off the oven. Cupcakes were on the timer so I went to watch the show, thinking I am the master of baking! In two minutes there were weird noises coming from the kitchen:((( Instead of the stove, I turned off the oven. My glaze was burnt, the cupcakes were still still juicy...I screwed up a little:)

Then I got this quote in my Gmail feeder from Socrates..."The only true wisdom is in knowing you know nothing." So true!

1. Mix flour, sugar, baking soda, cinnamon, salt with a whisk in a large bowl.
2. Beat eggs.
3. Add oil and vanilla to beaten eggs and don't over-mix.
4. Add egg/oil/vanilla mixture to flour/sugar/baking soda/cinnamon/salt mixture.
5. Mix the bananas into the batter
6. Add the chocolate chips and stir to combine. Do not over-mix, good 5-6 strokes are enough.

Bake at 350 degrees for ~25 minutes until golden and a toothpick comes out clean.

1) In a small saucepan, bring the milk to just under a boil.
2) Add the chocolate and, over very low heat, stir until it is just melted.
3) Remove from heat and stir in the corn syrup. Cool slightly.

Inspired from: Culinary in the Desert

Glaze each cupcake by completely dipping the top in the glaze. Feel free to decorate as you wish, sky is your limit!
Posted by Baking Fairy at Thursday, January 26, 2006