It is time to reveal the secret talent behind the new Baking Fairy banner! Belmin did this super cute character for me last week. I am simply speechless.

I was nagging Cenk for help, he works for his own ad agency, however he was putting me off saying they were way too busy. Desperately thinking about backup plans and trying to identify professional illustrators, he called me to say he found someone! 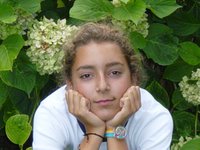 Apparently, Belmin has been working on fairies for a while and she agreed to do something for the Baking Fairy! All it took was a few words to describe what I want, no creative memos or endless conversations on Pantone numbers:) I guess this is what they call creativity and she is so talented!

She doesn't have a website yet, but it won't be long. Don't you think?

Thank you again Belmin'cim! You are the best!
Posted by Baking Fairy at Tuesday, November 15, 2005